A while ago, a friend of mine in my MRTT group convinced a bunch of us to run the Annapolis 10 miler. I had previously boycotted this race because I was pissed about it being canceled a few years ago (thanks, Hurricane Irene).

Thankfully, unlike previous years it was a. not a monsoon, and b. not a million degrees.

I hit up the expo first thing – we got fun MRTT tank tops that I had to pick up. The expo was a decent sized – all outdoors at the Naval Academy Stadium. The “swag” was a pretty bad ass bottle opener and a hat. On point Annapolis Striders!

We enjoyed an afternoon at a brewery (carbo-loading!) in Dundalk with hubs and little man – we played some cornhole and sipped on a sampler. On our way home, we picked up my favorite pre-race dinner of sushi and laid low for most of the night. 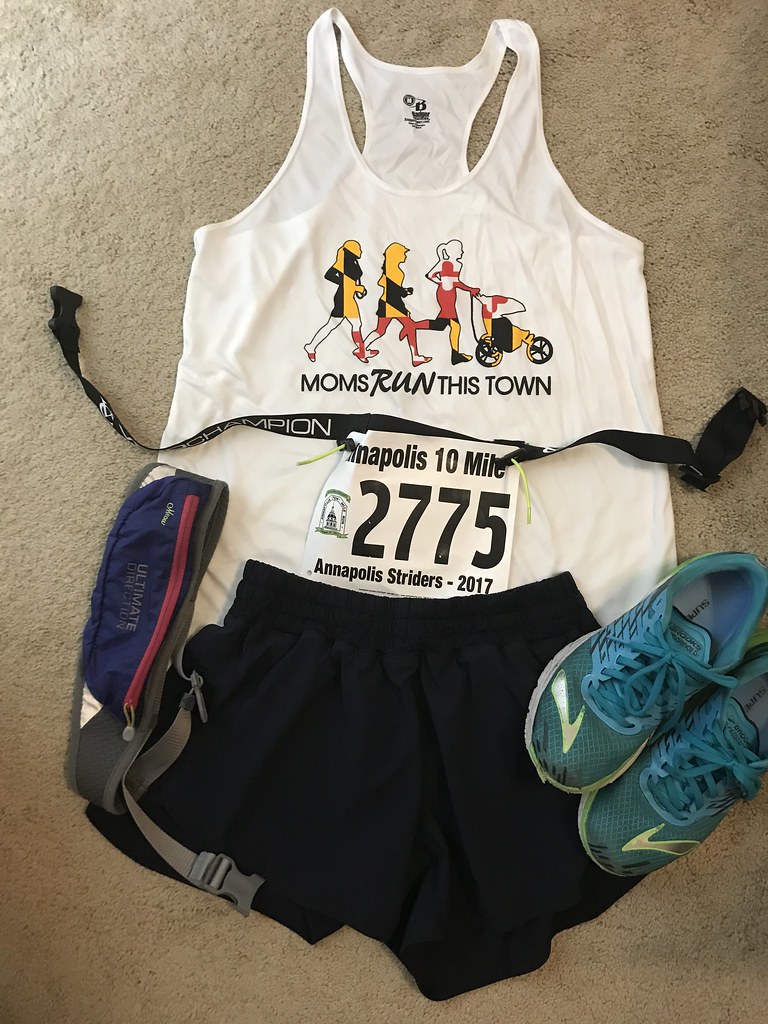 Of course, right before bed, I realized I hadn’t found my hand held water bottle and had a rage blackout since I bought it specifically for the A10. Needless to say, I did not find it and went to bed angry. Whoops.

Alarm went off at 5:25, snoozed, got out of bed at 5:35, rushed to get ready, grab a mini bagel and run out the door. Made it to Annapolis, hit traffic right before the stadium (damn you Rowe Blvd!!!) but still made it to the Blue Angel jet with less than 5 minutes before the scheduled MRTT photo. That’s what I call winning.

The weather was really, really perfect. We started opposite way of Zooma which was different BUT convenient given we had prime spots to hit up the quickly shortening lines for the port-a-pots as the start time got closer.

A group of us started the race together but got split up less than a mile in when one of our group members sprained an ankle on a pothole. Stupid Annapolis roads 🙁

Alas, three of us kept going running 4 – 1 intervals. I’m going to reiterate that the weather was beyond perfect for August in Annapolis. The hills, didn’t seem as bad as everyone made them out to be, and despite the run through some quieter neighborhoods on the Severn/Arnold side of the Severn River, the crowds were friendly and encouraging. 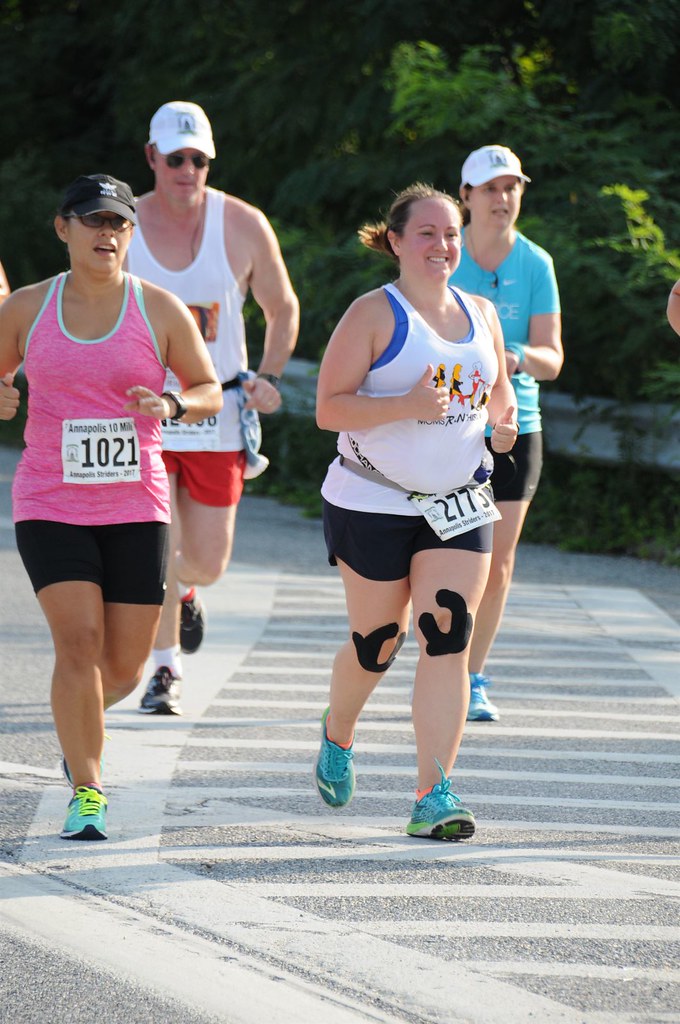 My knees, which have been acting up lately and that I’ve been getting some PT on, weren’t terrible until Mile 8 and that horrible downhill on 450 approaching the Naval Academy bridge.

I kept the attitude positive – the Naval Academy bridge at mile 8.5 is rough. But I kept us motivated with my countdown. The last half mile is around the stadium and up the final hill past the Blue Angel at the Naval Academy stadium – for anyone who has run Marine Corps marathon before, the uphill at the end of EVERY race is like a toned down version of the last .2 miles running up to Iwo Jima.

I finished strong – please excuse the incredibly awkward fuel belt/race belt. Note to self – one or the other. My time was 2 minutes slower than the CB10 miler back in April BUT, this was hillier, and I trained slightly better. I felt stronger at the very least whereas with Cherry Blossom I hit a big ole wall around mile 7. The intervals certainly helped me keep my knees and feet in decent shape. Though there were a couple of times I definitely walked when I didn’t need to necessarily (that picture I took on main street… 😉 ) but I had fun and really, unless you’re running for the big bucks…having fun and not getting hurt is all that matters.

Previous:
Currently | September
Next:
10 Beauty Products I Can’t Live without