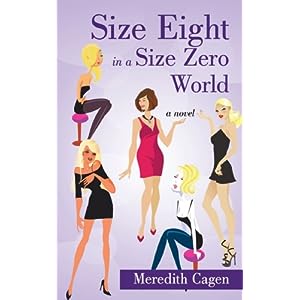 Back in January, I was asked to review the book “Size Eight in a Size Zero World” by Meredith Cagen. Given that she’s a quasi-local gal to me (Upper East Side in NYC so not really local but we’ll pretend) I was thrilled, because it’s rare that I’m asked to review a book that looks interesting. This one seemed right up my alley!

It took me a while to get to it, I’ve been reading a lot lately, though slower these days with the onset of the new job, but I got to it.

The story is based around Lindsay. A 30 something mother of two living in the Upper East Side, is unhappy. Unhappy with her job, her husband, essentially, her entire life. Then she meets “The Man Upstairs” a beautiful man who treats the opposite way her husband does – like she’s valued and respected. Insert torrid, neighborly affair here with it’s own ups and downs, and you’ve got a cause for a massive mid-life crisis. This book is about overcoming the obstacles to enjoying life, and finding that respect from the ones you love.

Meredith certainly has an interesting voice as an author, but let’s face it, chick lit is chick lit. It was an easy read, for the most part, when I wasn’t annoyed by the main character’s inability to make some change in her life. But I often do that when I read/get into books – I get frustrated when the main character acts petty, and seemingly, unrealistic. When I wish I could just tell them, for real, “OMG WHY WON’T YOU JUST DO SOMETHING WITH X, Y or Z?!?!” It’s my own little thing, and speaks nothing of the actual book or writer, it’s just me taking my books too seriously. Which I often do.

That being said, though the story was cute, I did find some of the conversations in the book to be shallow, mundane and unrealistic. But this is Meredith’s first book, and I hope first of many because it was an enjoyable read. While there were parts of the book I didn’t enjoy, I finished it, which says something (there have been books that I haven’t been able to finish because I loathed them that much). The plot was fast paced, a quick-easy beachy type read. There were certainly parts that had me laughing, and also parts that I could definitely commiserate with. But ultimately, I guess I had just hoped for more – but then again, I often do. Regardless of my personal qualms with the book, which are petty at best, I would definitely recommend this to anyone who enjoys chick lit or is looking for an easy, light-hearted read.

To pay it forward, I want to pass this book on – leave a comment if you’re interested and I’ll pick someone at random on Thursday March 25 in the afternoon and post it here.

{disclaimer, I was not paid for this review, the thoughts here are my own.}

Previous:
On Running
Next:
I will…