On Saturday, I ended my 2015 triathlon season. This season I completed IronGirl Columbia, MD Sprint duathlon and the Hagerstown Duathlon – a nice assortment of races and I’ve gotta say – the duathlon is a REALLY fun event.

Thankfully, Hagerstown is 1.5 – 2 hours from Annapolis – we left later on Friday than i would have liked but I didn’t pack Thursday night as I had hoped to. There wasn’t traffic, but it was late (10p?) by the time we got there – waking up Ethan to go into the hotel and get him resettled meant no one got to sleep at a reasonable hour and no one slept really well either. We stayed at a Clarion Inn which… wasn’t the nicest but for the night it was fine.

Because of the youth race and the 5k before the adult duathlon, you had to check in before 8:15a. Had no problem, but then, what do I do for another hour? Because we rushed out of the hotel, hubs and I hit up Dunkin Donuts up the road to grab a bagel before my race once I got my bike racked.

It was a mass start – with really, only about 200 – 250 runners. I felt really strong during the first half. It had a couple of rolling…molehills. Calling them hills would be unjust but for some reason my achilles and calves notice any sort of elevation.

The bike was tough. It was shorter than my previous duathlon by about 3 miles – the roads were decent (though a bit bumpy in parts) with wide shoulders and hardly any traffic which was really nice. My chain dropped around mile 8 right before a hill so I lost a lot of time and two other riders that I had been going back and forth with (you pass me, then I pass you…) got way ahead of me. Frustrating. I finished strong though – considering the horrible headwind and side wind that made riding really tough for most of the course.

On the bike it had sprinkled a little bit – so I found it funny that my sneakers were damp – hubs said it had apparently sporadically poured for a few minutes! I started the second run feeling…okay. My legs were heavy and i was concerned because I hadn’t put in any brick workouts since Iron Girl. I started doing 4/1 run/walk intervals to break my legs in. The second half of the run my legs were super tight and I walked a little more than I had hoped. It wasn’t a super hilly course (light elevation) but just enough to irritate the crap out of my calves. 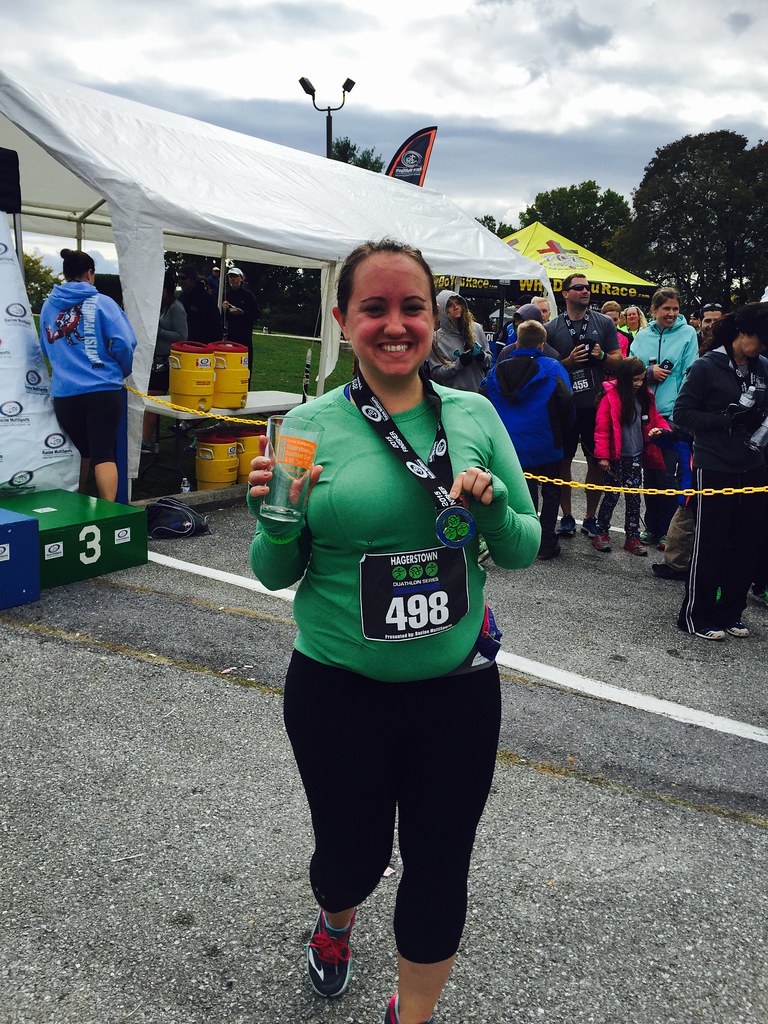 The best part of this race? Technically I was 4 out of 5 in my age group BUT because the 1st place AG finisher was also the overall female, everyone else got bumped up so I was “third” in my age group! I’ve never hit the podium before, and while technically I was 4th, the pictures show otherwise. Podium-ing aside, I was mostly proud of the fact that I shaved off over ten minutes from my early duathlon.

Now to begin planning my 2016 race calendar! Any small to mid size tri’s or du’s in the mid atlantic I should check out??

Previous:
Currently | October
Next:
What I wore: Girls Night Out